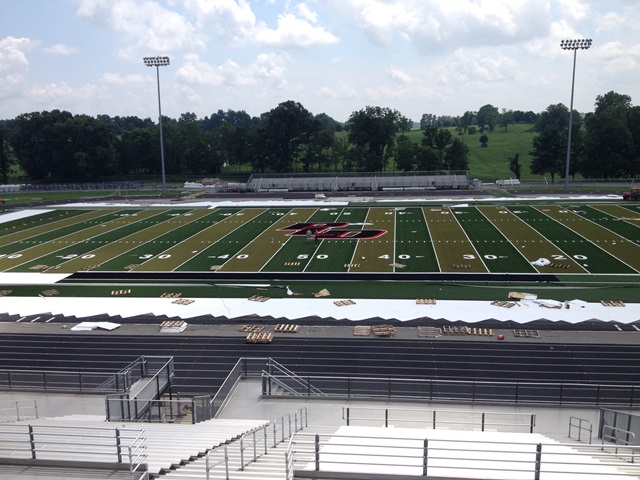 The synthetic turf athletic fields at Tates Creek High School and Paul Laurence Dunbar High School, in the Fayette County Public School District in Lexington, Kentucky, had reached the end of their expected life. The district has faithfully performed annual ASTM Standard G-max testing, which had revealed that, as expected, the fields were hardening with age but still testing within safe standards. Tates Creek field exhibited symptoms of poor drainage, which was confirmed by ASTM Standard dual ring drainage testing that was conducted in February, 2013. After reviewing the test reports, the district determined that replacement of the synthetic turf on both fields and repair of the drainage system at Tates Creek High School were necessary to allow continued use of the playing surface by multiple school teams as well as campus events. In proactive efforts by Fayette County Public Schools, the field drainage system at Paul Laurence Dunbar was also modified. Both fields, upon the completion of updates prior to the regular football season, were performing at optimal levels.

Home field advantage played a part in the 2013 fall sports regular season statistics for both schools. The Commodores, with a stunning new field and maroon uniforms, hosted their final regular football season game against the Lafayette Generals in the Roy Walton Bowl in October. Tates Creek rallied in the second half and beat the Generals 35-28, winning the district title. It was an emotional day for coach Mike Harmon, who stated that Tates Creek had not won this title in over ten years.